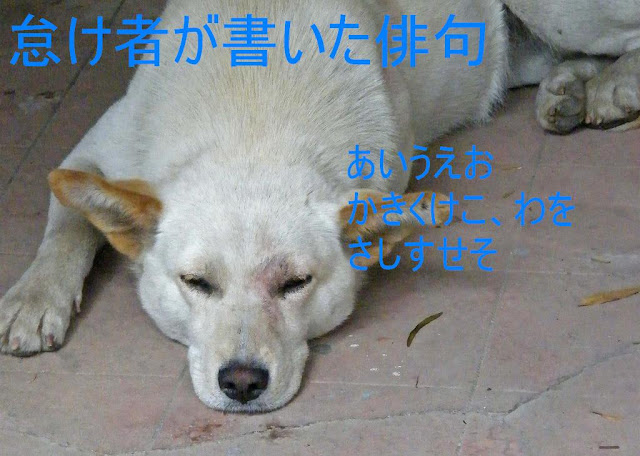 The haiku actually came to me a few days before this assignment was posted to DS106. I have a really long train ride to school/work. Sometimes, when I'm on that long sleepy train ride, I get these silly ideas. I was thinking about how haiku are a little more easy in Japanese since the language is built around speaking in clearly defined syllables (as in one character in katakana or hiragana will always be one syllable).

I thought about how easy it could be because the basic Japanese alphabets are effectively made of lines of five syllable combinations. That would net me 15 out of the necessary 17 syllables, but what could I choose for the remaining two? That answer was solved pretty quickly because the "w" line only has "wa" and "wo." Once upon a time, there were "wi, wu, we" syllables, but they are as long gone as "yi" and "ye." Actually, Yebisu Beer still uses the "ye" syllable on their logo, but people pronounce it as just "Ebisu." Also, the "Yen" as we know it is pronounced "En" for probably this same reason. Its like how "going to" became "gunna" and "catsup" became "ketchup." Actually, spell check thinks that "catsup" is wrong but accepts "ketchup." Irony.

In the original draft of the haiku, I used the "t" line instead of the "s" line. I never actually learned the alphabet in order (because there actually isn't any need to since its completely phonetic). The original format is the one that's still the desktop to my computer at work. My co-workers have gotten a good laugh at it. Some say there is beauty in simplicity.

I also came up with the English version on the same train ride. The truth is, any time you say or write something in Japanese, Japanese people ask you how you say it in English. I had to come up with something clever to say. It works out since "W" is the only letter in the English alphabet that is more than one syllable in length.

Admit it, you just ran through the whole alphabet in your head and checked. No worries, I did right before I typed this out.

The original assignment does say to use a dailyshoot picture, but I used a flickr CC License search for the word "lazy" instead. I stand by my decision. The words were simple just typed over top of the picture using MS Paint.

It turns out that Japanese people are surprised that we know what a haiku is. They really are great tools for learning pronunciation and syllables in general. That's why we learned them in elementary school. They're also great tools for creative thinking. Its a tough fight to be able to say something meaningful within such a confined and structured space (its far worse than twitter).
Posted by Steven Q. Dangerfist at 6:09 AM